Each year, we run a subsidised trip to Gent to watch the 6 day racing at the iconic Kuipke velodrome, and sometimes a bit of local ‘cross too. Watching the track racing in Gent is pretty special and it’s something you should put in the diary if you’ve never been. Last weekend, 6 of us went to the hallowed land of cycling, Trappist beer and frites, and this time we took our bikes… below, Wayne T gives us the lowdown.

“After many years of heading to Gent to watch the 6 day and the CX racing, we decided to break from tradition and actually ride our bikes as well as watching others do it, whilst drinking many beers. It proved a success as neither the drinking nor the riding was compromised in any way.

We got away sharpish from East London, loaded the bikes and kit aboard the school minibus and off we went. Arrived in Kruishotem (middle of bloody nowhere) at around 11:30pm local time and slept in possibly the coldest hotel outside of Lapland. Wayne C (I will refer to him as The Don from now on as Wayne T and Wayne C should never be mistaken for the same person) remarked at breakfast that the hotel did a magnificent job of gearing us up for a chilly November Flandrian ride by making the inside of the hotel as cold as the outside.  We were excited, caffeine and carb-fuelled and fully acclimatised as we set off early. 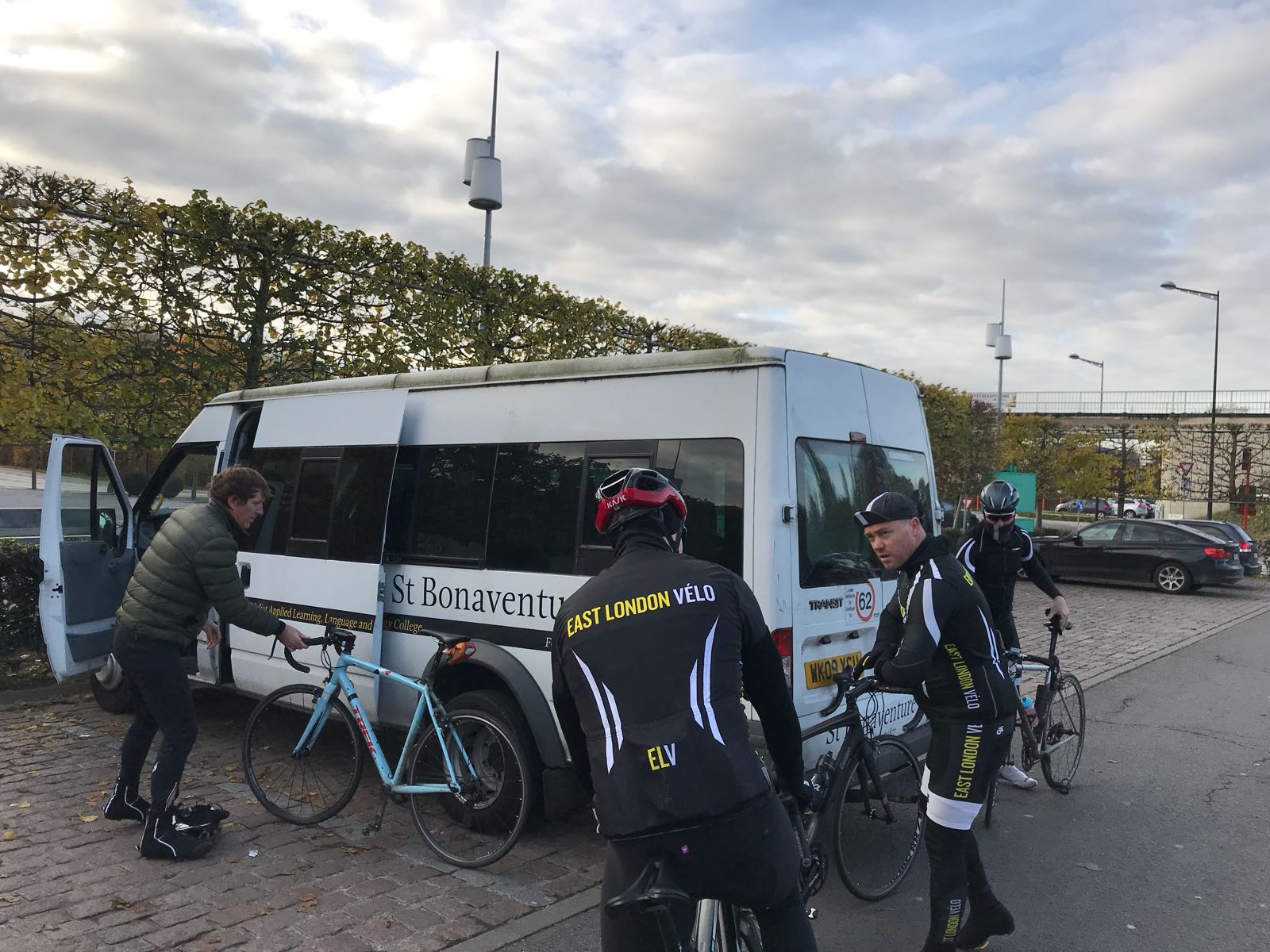 We drove to Oudenaarde and parked as close to the Museum of Cycling as we could, and what a great idea that turned out to be. This was an ideal base to get to the heart of some of the most famous bergs on the Ronde van Vlaanderen as part of a 50 mile loop. The cycling was instantly pretty epic and only a few kilometres (Rule #24) in we encountered our first stretch of cobbles. The Wolvenberg wasn’t too bad and maybe gave us a false sense of what was to come. These cobbles might not be too bad after all, not sure what all the fuss is about. Maybe it was the fresh legs, maybe it was the excitement, maybe it was the fact it was a perfect November Day and we were loving the fact we were riding our bikes in new ELV kit in Belgium. There was most definitely worse to come.

Next up was The Caildenberg, a very short (wrong) turn away from The Molenberg, which we stupidly (sensibly?) managed to avoid through some pants Garmin navigation. As we got to the top I took a look down The Molenberg and there was no way I was riding down it just to ride back up; it looked very steep and the cobbles looked mean, so we pressed on along a beautiful ridge road with some amazing views. Ben “The Hormone” took some fantastic shots of us all smiling as we rode up a gentle incline in the sun. This was turning out to be a memorable ride. 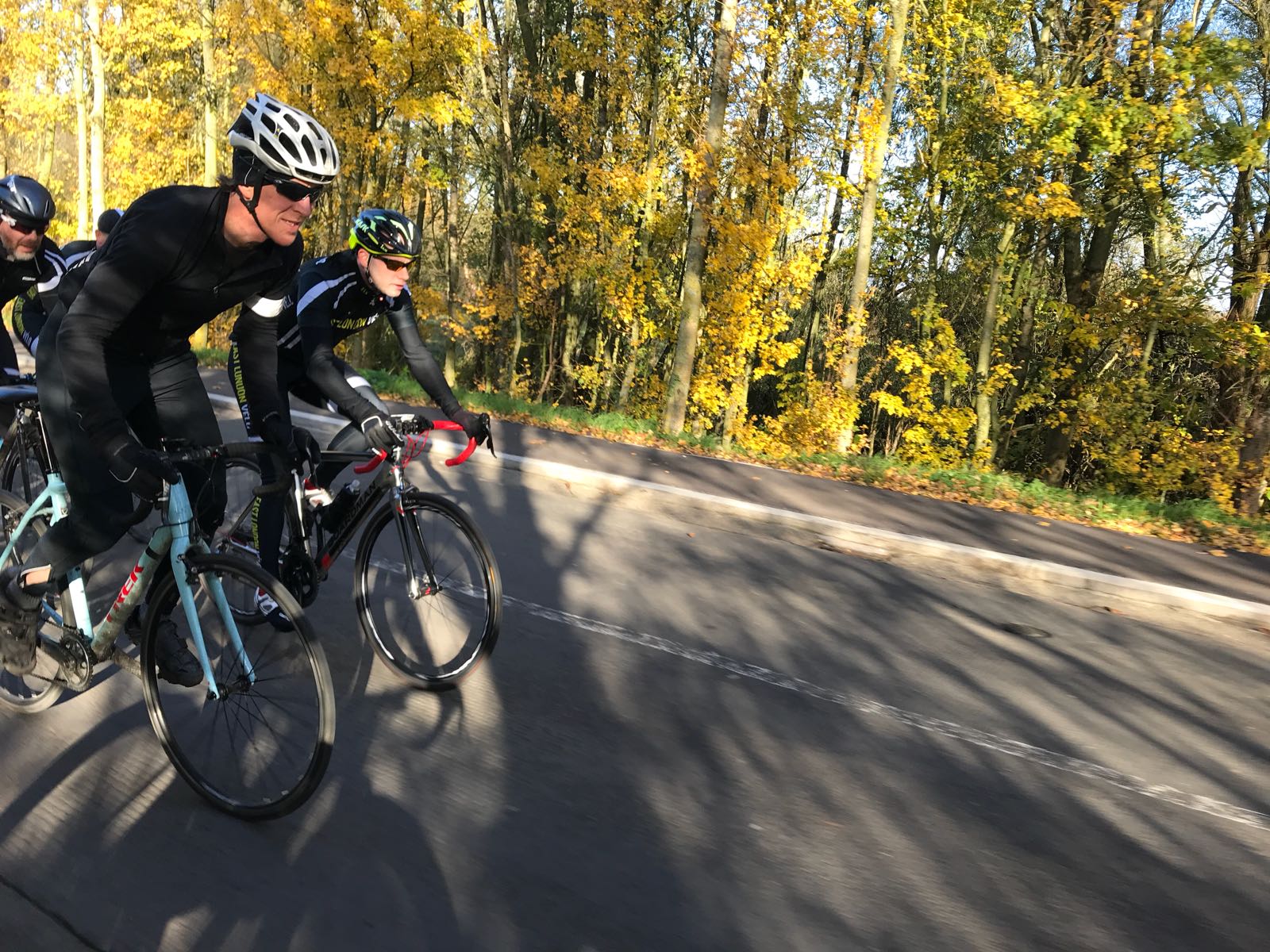 The next climb was The Leberg and it was quite tough. It was also followed by a very long section of cobbles which gave no mercy whatsoever. These were real cobbles. Bone shaking, teeth chattering, shoulder snapping, undercarriage battering cobbles. They went on for a while and gave me the first sense of admiration for the pros. How did they do this at their race pace? The smooth tarmac afterwards was most welcome, my whole body was numb from just a relatively short section of pave. Wow. The Valkenberg and The Kaperij were tough and started sapping the legs of those of us who were less fit, me very much included. That horrible feeling where you realise you are barely half way round and the legs are starting to feel it a bit too much. Never mind. Harden up and push on. The next climb was the longest of the day and by no means easy. The Kanarieberg was tough but the surrounding forest made it totally stunning. Jason and I took forever to get up it but enjoyed it the whole way. The legs were hurting but the epic roads made it easy to keep going with a huge grin all the way out of the forest. 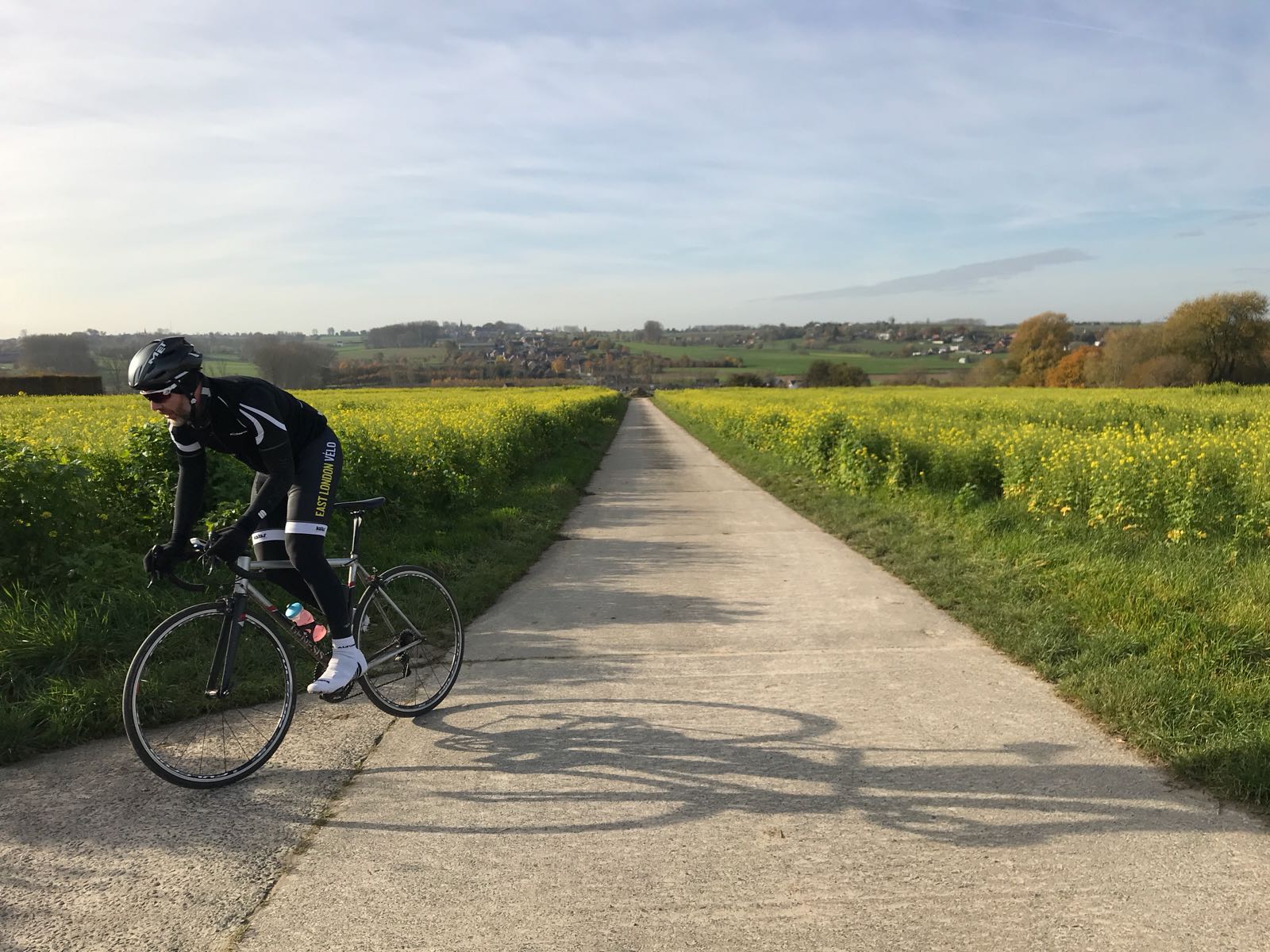 Then the fun really started. The Kruisberg was an absolute rotter. I was struggling and Jason edged past me on the first part. The cobbles were nasty and the gradient steep. His gears started slipping, the tension was palpable. How on earth would he make it to the top with his gears slipping? I feared for him. It was over quickly though. He lost traction, fell sideways and put it all on his elbow, still clipped in and writhing like a fish who had just been landed on a harbour wall. 86kgs of Welsh Beef barely made a dent in the rock hard cobbles. I wanted to laugh but I was doing 1.8kph in my granny gear with a cadence of 12rpm. It is a skill I have that I can go slower than anyone I know up climbs. I had to stop, purely out of support for Jason I am sure you understand. “Are you ok mate?” “Yeah” “Ok, I’m off then.” (Clips in and rides off). Luckily The Don arrived to offer some proper assistance, which was good as I was in no state to. 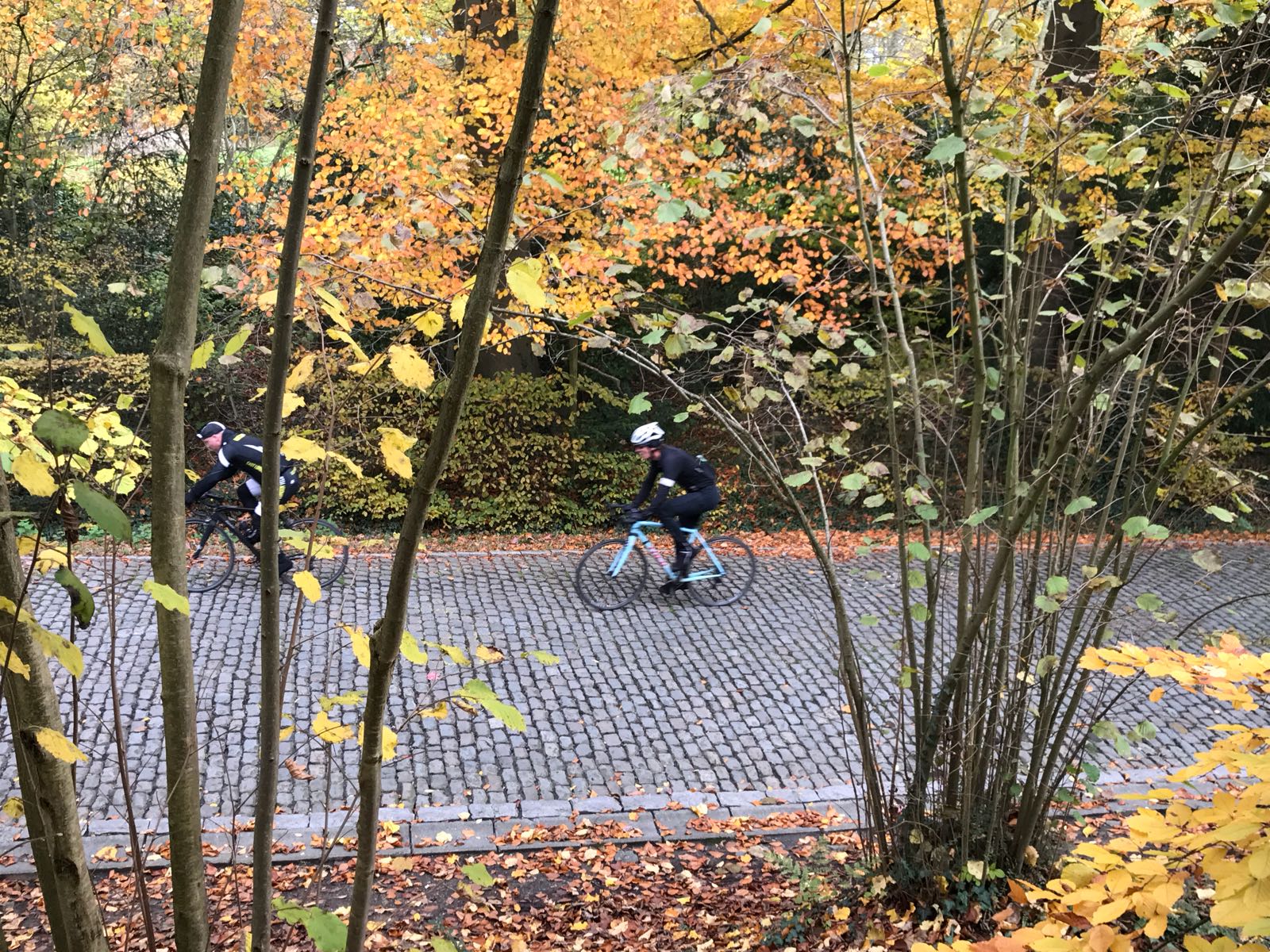 The ride from then on was about survival for Jason and me. Ben, Joel, Steve and The Don were absolutely smashing it up the climbs and setting some good Strava times. The Karnemelkbeek and Oude Kwaremont served to sap the legs even further before possibly the main event of the day – The Paterberg! This climb is short, super steep and the cobbles are nothing short of horrendous. After Oude Kwaremont, we all arrived at the bottom of the climb together and felt confident, only two more climbs to go. We can do this. We turned right onto the Paterberg together as a group and when you see the wall rear up in front of you it has a profound effect on you. My reaction was to swear, loudly. The Don’s reaction was to laugh. Ben and Steve just smashed it to the top. Myself and Jason got in the granny gear and grinded. It was tough and a couple of us stacked it. We were a bit ashamed (as was The Don) but we laughed it off and trudged up in our cleats. I can honestly say I have never seen anyone go from upright to horizontal faster than Joel did crashing on the Paterberg. I think Steve felt left out at the top when we regrouped and he tried to crash his bike on purpose, but he failed. He can only dream of crashing on cobbles like Jason and Joel.

The last part of the ride was the Koppenberg for Steve, Ben and The Don but a nice pootle for me, Joel and Jason. We took the scenic route while the others smashed it up the Koppenberg as hard as they could. I even managed to crash outside someone’s house after a wrong turn onto a gravel driveway. A boy looked on with pure pity at the MAMIL on his back, still clipped in with his bike in the air.

The Flandrian stew and the beer were amazing back at the museum. It was like the recipe had been created for hungry, cold cyclists who had taken on one berg too many – for some of us at least, this was true. A great ride followed by some great grub.

The track racing at Gent 6 day is always brilliant. I just don’t know how the riders keep churning out the laps at breakneck speed, day after day (6 days, in fact). T’Kuipke is an iconic velodrome, small, intimate and loud, packed to the rafters every night of the event. The racing didn’t disappoint and neither did the beer or the hot dogs. Despite a 5am finish, we still managed a short ride on the Sunday morning before heading home tired, but buzzing from a great weekend.

Cannot wait for next year already. Anyone fancy driving the bus?”