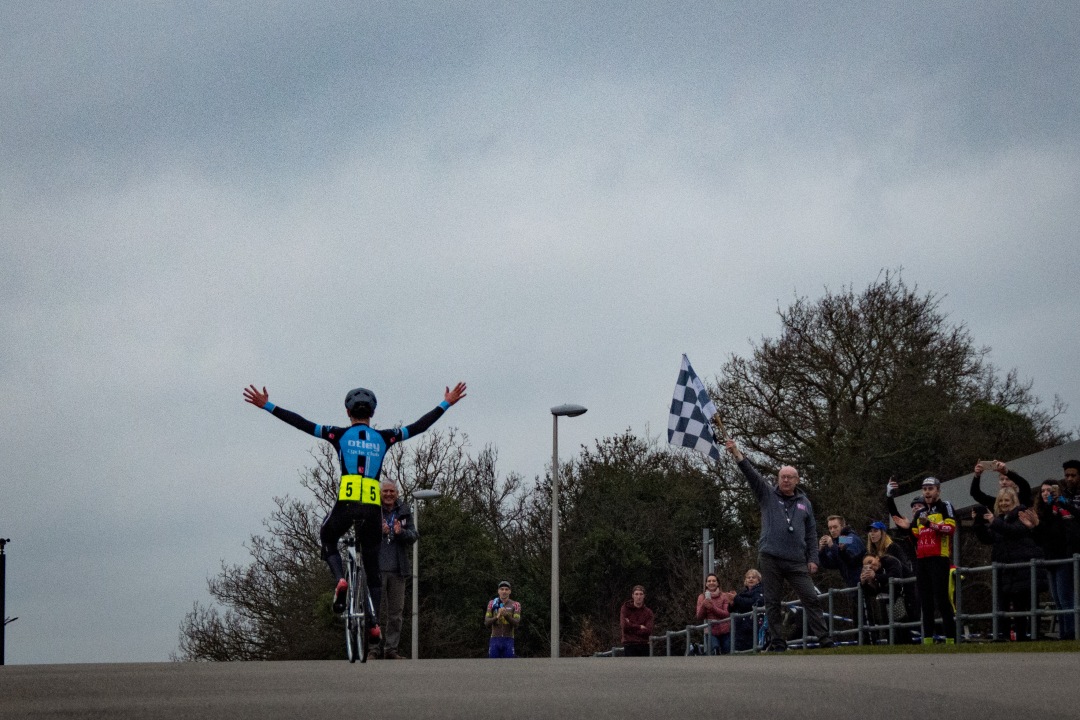 Week seven of the Winter Series and the weather was positively spring-like – shorts a plenty for the riders and marshals down to just two jackets each.

We were again happy to welcome a full-points field for the women’s E1234 and were treated to a lively race, with five riders immediately building a gap on the rest of the field. The bunch held for several laps until Connie Hayes (Liv Awol) attacked, and only Mathilde Pauls (Sigma Sport x Threo) and Alicia Speake (Team LDN) were able to close her down. As the laps ticked by, Alicia and Connie upped the pace, resulting in a two-up that would endure for the remainder of the race. With both riders looking equally strong, we could only speculate as to which of the two would clinch the win. As they entered the final half lap, it was Alicia who broke free, peeling away and cresting the Hoggenburg solo with no other riders in view, as you do, no big deal. Congratulations to Alicia, and to Cycle Team London on the first win for the team.

Mathilde retained her gap on the rest of the field, finishing strong in third place, and putting her at the top of the Series leaderboard. Rebecca Hair (Histon and Impington CC) and Michelle Arthurs-Brennan (1904 RT) continued to work together, with Rebecca finishing in fourth place and Michelle in fifth. Special mention to Olivia Poole of Islington CC, who paired early with Claire Hammond (TW1 Racing) and rode strong for 6th place on her debut race.

Next Saturday is our final week in this Series and we have the only women’s crit race in London that day. £10 entries available now on British Cycling. Or pay £10 on the day.

The men’s 234 field was a healthy mix of new faces and Series-chasers. With conditions literally a breeze compared to last week, it started fast but stayed tidy, with the early breaks brought back within a lap. Liam Fenner (API-Metrow/Bodyby JR) made the first convincing effort, gaining and holding 10 seconds on the bunch, but with no one for company, was swallowed back up.

We suspected the second big move – an attack off the front at 10 laps to go
– would end the same way for last week’s fourth placed rider, Tom Cullen (Otley CC). Thomas Arkell (East London Vélo) gave chase, sitting in second place for a couple of laps, before being brought back into the fold and taking a brief but fatal sojourn onto the grass on the bell lap. With the gap oscillating lap by lap, it felt like it could go either way for solo leader, but as he summited the Hoggenburg for the final time, the bunch were nowhere. A stunning victory, Tom, congratulations and thank you for bringing what has to have been the loudest support crew ever seen or heard at Hog Hill.

Next week is our final event! We can’t believe it either. Pre-entry is available now here – men, save a fiver by pre-entering, women, pay £10 in advance or £10 on the day. Current series standings are here – we will be tallying the final scores and issuing series prizes at next week’s event so do come on down.

Some awesome photos of the event are here.

Full results will be live on British Cycling shortly.

Thanks as always to our stellar racers, comms and ELV marshal crew. See you next week for the last hurrah.